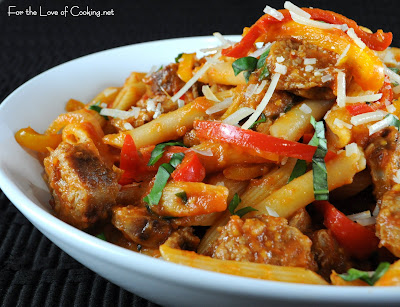 I am a lucky girl because I have a kind and generous neighbor named Jack. Not only is he a great guy he also has a green thumb and a very big garden. I looked out my window recently and there were two huge bags of fresh veggies waiting for me – yes, Jack even delivers. In the bags I found zucchini, cucumbers, corn on the cob, and a ton of beautiful tomatoes. I decided to make a simple marinara sauce using the tomatoes. I tossed some penne pasta in the marinara and added some turkey Italian sausage slices and sautéed bell pepper and onion. This was a simple and delicious meal that made my whole family happy, especially my son who had three servings! Thanks for the beautiful and delicious tomatoes Jack… you truly are the best neighbor.

Penne with Sausage, Peppers, and Homemade Marinara:
Recipe and photos by For the Love of Cooking.net 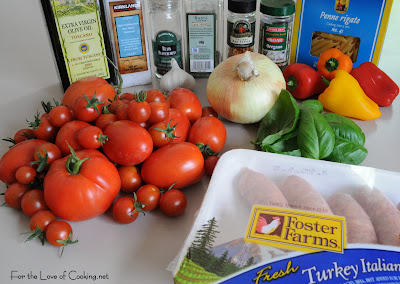 Preheat the oven to 375 degrees; line a baking sheet with tin foil then coat with cooking spray. Quarter the tomatoes, cut the onions and break up the head of garlic (KEEP SKINS ON SO THEY DON’T BURN). Spread the tomatoes (except for the cherry tomatoes), onions and garlic all over the lined baking sheet. Drizzle with 1 tablespoon of olive oil over the top, then sprinkle with dried basil and oregano as well as sea salt and freshly cracked pepper; toss to coat. 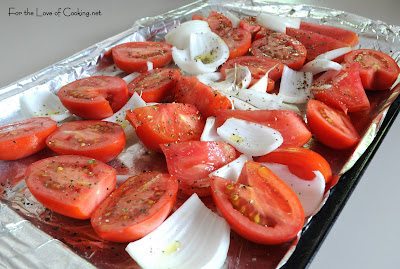 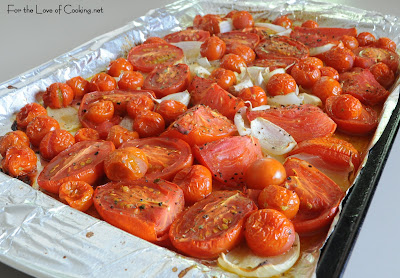 Once they have cooled, carefully peel the skin off the cloves of garlic. Spoon the tomatoes, onions, garlic and juices into a small Dutch oven. Using an immersion blender, blend the vegetables until smooth, making sure there are no chunks. Simmer for 1-2 hours.

Cook the turkey Italian sausages in a skillet over medium heat until they are cooked through. Remove from the pan. Add 1-2 teaspoons of olive oil to the same skillet and cook the peppers and onion until soft and tender, about 5-7 minutes. Season the peppers with sea salt and freshly cracked pepper, to taste. Slice the sausage.

Cook the pasta per instructions then drain. Add the marinara to the drained penne along with the sausage, peppers, and fresh basil then toss until evenly coated with marinara sauce. Top with Parmesan cheese and serve. Enjoy. 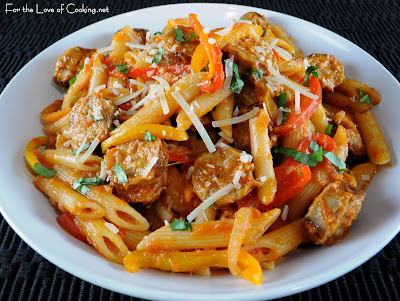