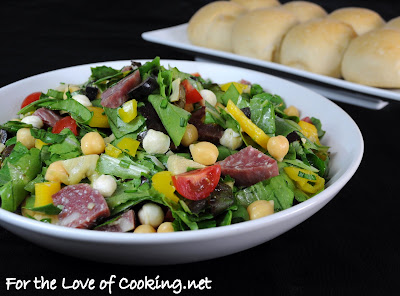 For the third recipe featured in Cookbook Week* I picked this Italian salad from the beautiful cookbook I was recently sent called Piatto Unico: When One Course Makes a Real Italian Meal by Toni Lydecker.The cookbook is filled with wonderful recipes and photos that I have bookmarked to make. This salad was a snap to put together and tasted really delicious. I adapted it by adding extra ingredients I had on hand like, bell pepper, tomatoes, and artichoke hearts. I loved the combination of the creamy mozzarella balls, with the spicy pepperocini peppers, and the salty salami with the tangy vinaigrette and the soft garbanzo beans. I served this salad with fresh baked rolls to friends who were over for lunch and it was a big hit with everyone – even the kids.

*Cookbook Week: I was recently sent 5 wonderful cookbooks (food blogger perks) so I decided to do a recipe from each book this week – October 10-14, 2011 – (First recipe), (Second recipe)

Chopped Italian Deli Salad:
Adapted recipe and photos by For the Love of Cooking.net
Original recipe from Piatto Unico by Toni Lydecker 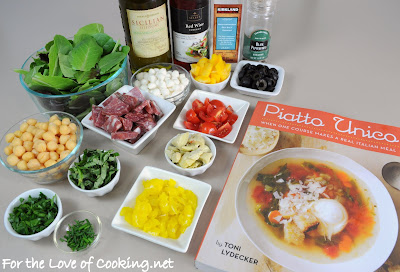 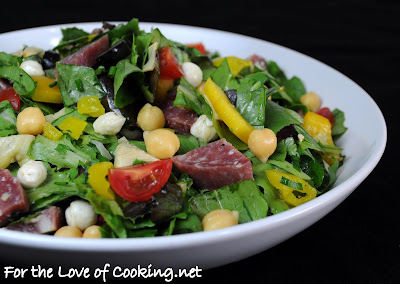 Click here for a printable version of this recipes – For the Love of Cooking.net