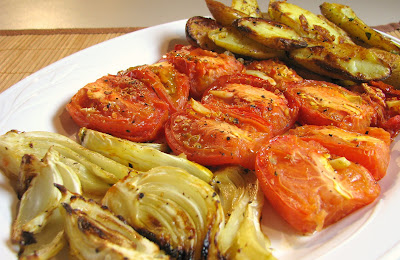 I was in the mood to roast some veggies. After looking through my kitchen, I grabbed a fennel bulb, Roma tomatoes and fingerling potatoes along with a couple cloves of garlic. I roasted them with a bit of olive oil, sea salt and pepper. I can’t tell you how delicious they were. I am now a huge fan of fennel – especially roasted. The tomatoes and fennel were tender and delicious while the potatoes were crisp on the outside and tender inside. These roasted veggies would be a terrific side dish for fish, chicken, beef or pork. Simple and tasty. 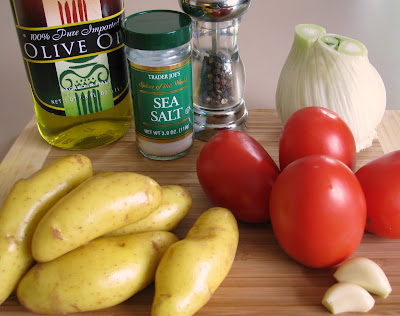 Spray a large baking tray with olive oil cooking spray. Slice the fennel into large chunks, keeping the core in tact. The core will help hold the fennel chunks together for better roasting. Slice the tomatoes in half lengthwise as well as the fingerling potatoes. Place the potatoes, cut side down, on one end of the baking tray. Add the tomato halves and fennel chunks to the other end of the tray. I do this so the potatoes will get crispy instead of soggy. Take the garlic cloves and cut them into slivers. Slide one or two slivers into each tomato half. This will infuse the tomatoes with the garlic flavor; it will also roast the garlic without burning it. Drizzle the veggies with olive oil and season with the sea salt and fresh cracked pepper. Roast in the oven for 35 minutes, then turn the potatoes and fennel over and roast for an additional 10 minutes. Enjoy. 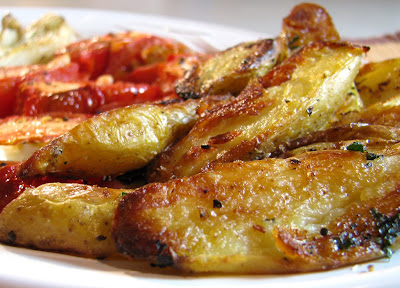 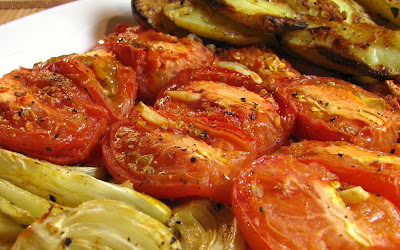